Another game, another depressing drive home from Gillette Stadium. This one hurt. It hurt because it's now officially the second half of the season and there is just barely anything left out there. Sunday night I saw a team with their tails between their legs. It even hurts me to relive the game and write this. That's why it took me two days to get around to it. Just had to clear my head.

Fresh after a loss for the US ladies in the Women's World Cup Final, the Revs offered little consolation to fall back on. Firstly, let me say that Philadelphia is probably my favorite team to watch play. Their season so far has been one to admire, and it is truly no surprise why the Union are 1st in the Eastern Conference. They play tight, smart football. Sure, they aren't without their flaws, but their on-field chemistry is something I am continually envious of.

If the week that we got a shirt sponsor and Benny Feilhaber was the best week of the season, I think this week might have been the worst (although, who knows how much worse it can/will actually get). Losing to Man United was something I expected, but losing both Didier Domi and Ousmane Dabo? Didn't really expect that--maybe at the end of the season but not right smack dab in the middle. Perhaps it's best to just cut our losses, but one just can't help but feel like we could have spent that money on players that might have made more of an impact or at least been able to play a few more games. Anyhow, here are some quick thoughts on the game:

Question: how have we still not learned how to properly pass a soccer ball? Our 40% possession going into the half is what I have coined as "panic passing". Controlled passing means you are keeping the pace of the game; that is not what we do. We pass the ball out of panic. Zak Boggs, I think, is guiltiest of this, in my opinion, but I truly don't think anybody on this team is innocent of the charge. And all too often this panic passing results in us just kicking the ball out of bounds and thus losing possession. I am sick and tired of watching this team kick the ball out of bounds. Let that be known.

While we are on the topic of things I'm sick and tired of seeing, we have got to stop launching the ball recklessly down the field praying that one of the Gambians will catch up to it in time for it to at least not go out of bounds (I'm not completely positive what anyone expects is supposed to happen once they catch up to it, I guess send it in to Lekic and hope that his deplorable first touch doesn't completely kill the play).

And speaking of Lekic, I have go to mention one particular moment during this game that really irked me. Now, I think only the folks in my section (113) could appreciate this (and did appreciate this), but there was a moment in the second half when the ball was lost out of bounds near the Philadelphia goal (of course, right?) and the ball boy that was closest got a new ball to the Philadelphia play (I forget who) but another stray ball snuck out onto the fields. All of a sudden here comes Lekic making a scene about this ball and basically yells at this kid to get it off the field. All I could think (out loud) was the nerve that he had to yell at ball boys when he should be focused on working harder on the field to score some goals. You've got to consider that a reasonable manager would stick him on the bench eventually. If he showed even half as much hustle as Mansally he would be a better asset to this team, but in my eyes he is just a bona fide bust.

Moving on, what I must comment on above all else was The Fort's protest in the 16th minute. If you didn't catch it yet, check out a video of it here. Notice how excruciatingly silent it was right before the demonstration begins. Truly remarkable and admirable. I personally applaud all supporters who took part in the protest and honestly hope that it was felt by those at whom it was directed.

For the first 15 minutes, truly the only people you could hear besides a few shouts from the players on the field (yes, THAT is how quiet it was there) was a tiny section of Philadelphia Supporters on the other end of the field from the fort. 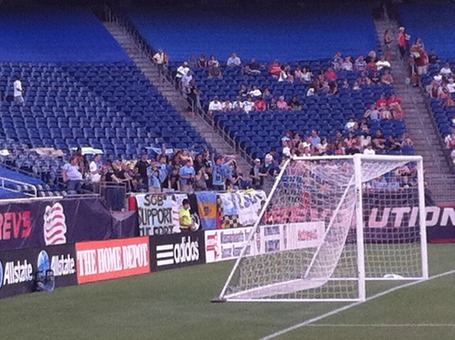 Note the Support The Fort sign in front of them. My favorite part of the game was every time Matt Reis had a goal kick, the Union supporters yelled "ooooooooo support the fort!" in place of the dreaded YSA chant. Brilliant. Hats off to the Sons Of Ben for all they've done. My other favorite part was watch the Revs show their own support by waving and applauding The Fort as they took the field. It was really a moment, and I'm glad I was there for it.

Another game, another zero points. What's there left to say anymore? Benny's ejection was, I thought, clear indication of his mounting frustration of being at a club where he just cannot succeed. I only hope that we can manage to hang on to him longer. And Shalrie clearly was missed out there, if I were to state the obvious.

Last thoughts: I'd like to see Ryan Guy get a start at DC. The kid's got professional experience and I just feel like we need to give him a chance. And I understand that boy wonder Diego Fagundez is making the trip down to DC, so it would please me to no end if he got some action so that we can see what he can do on the pitch. We've literally got nothing to lose, right? Finally, I don't think that we should be too quick to abandon the 3-5-2 that we tried out on Sunday. Get the combination right and maybe it can succeed. Again, nothing to lose right?

What do you think? Is all hope lost? Is it time to just start looking towards next season? At this rate, we'll at least get a high draft pick, right? Leave your comments below. We LOVE comments.