The only thing worse than a hangover is an angry hangover; the kind where you are just mad about how you even got to be hungover in the first place. The booze may have worn off, but the emotions remain. Stupid emotions. That's kind of where I've been at all day, just truly mad. As if the Gold Cup loss to Mexico wasn't bad enough, we had to go and give away an early lead to the Sounders, who then took us to school for about 70 minutes. I'll tell you one thing, after this weekend I don't think my girlfriend will be watching anymore soccer with me any time soon.

Let's get back to that early lead. I think I nearly did a spit-take when Nyassi scored in the third minute. Maybe it was luck, but I'll take it, whatever it was. By the way, what happened to that statistic about the Revs winning games when they get the first goal? So much for that.

But, just like the Gold Cup final, I was once again duped. Both games I knew, in my heart of hearts, that we had a very slim chance of winning. I was pretty confident that Mexico was the better team and would just absolutely whoop us (they pretty much did, right?), and while I knew the Revs had the potential to give the Sounders a run for their money, I was realistic going into it. I mean, after all, Seattle is no team to scoff at. Honestly, not many western conference teams are. Just look at the records.

But those first goals just kill me. As soon as that happens BOOM--all rational thinking is gone. I do it to myself really. Anyway, let's get into the nitty gritty.

First Half: The team looks confident after the goal (as they should be). But Seattle finds their form quick. The Revs have their defending work cut out for them. Soares gets a talking to and luckily it was too early for a card. This kid is looking frustrated out there. And he has every right to be. He even says in his "Rookie Life" highlight piece that he doesn't take losing so well. Still a solid defender out there and glad that we have him, week in and week out.

Nyassi looked like a damn blue angel out there. This dude's got some maneuvers, I tell ya. But you knew that already. At around the 16th minute he had another shot that was a little further out than one would like, but it looked to present a decent challenge for Kasey Keller. Just the fact that he was creating some offense was pretty key at that point.

20 minutes in an Feilhaber is getting pissed at the refs. If only he knew how the rest of the game was going to play out at that point. There was a lot of Benny vs. Servando Carrasco in the first half, and due to refereeing or otherwise, Carrasco seemed to come out on top in most of those fights. Nevertheless, my god was it good to see Feilhaber back out there.

Ryan Cochrane collides with Leonardo Gonzalez as they both go up for a header. It looked pretty rough for both players. Somehow Seattle winds up with the free kick (I'm still not sure what quite happened there) which of course is the free kick that leads to Tyson Wahl's first MLS goal. As pissed as I was, that was a shot for the ages. Golf clap.

Defense continues to falter and of course leads to the second Sounders goal. As the first half finished up, I liked what I was seeing out of Nyassi and even Ryan Guy was looking pretty poised out there, despite having a kind of quiet half overall. Oh, and, in case you missed it, we had only 32% possession this first half. 32%.

Two words for the Second Half: bad decisions. Pretty much all around. Nyassi still speedy out there but not getting much support. Phelan is still bruising out there (glad he's on our side), but not really producing much. Then the subs happen. Zak Boggs and Kenny Mansally come on for Nyassi and Guy. That's right, Ryan Guy, who just set up Rajko Lekic for what was almost an equalizing goal.

Regardless, Zak Boggs isn't much of an improvement and Mansally still showcases his struggles in front of the net. Sounders get some subs in (including Pat Noonan.. YAY!), and the game plays out to the same scoreline that it went into halftime as.

Now, I know that I am forgetting someone here... hmmm.... oh that's right! Mr. Rajko Lekic! Now, I know, I am very critical of Lekic. I'll admit it. And I don't mean this to be a weekly "Rag On Rajko" jamboree (although, not a bad name for a new weekly section right?), but the last time I expressed my growing disdain for Lekic he ended up finally scoring another goal. I guess this is what I get for missing last week's PGH piece. Anyway, let's jsut quickly have a gander at his game stats against Seattle using MLSsoccer.com's magnificent new "chalkboard" feature: 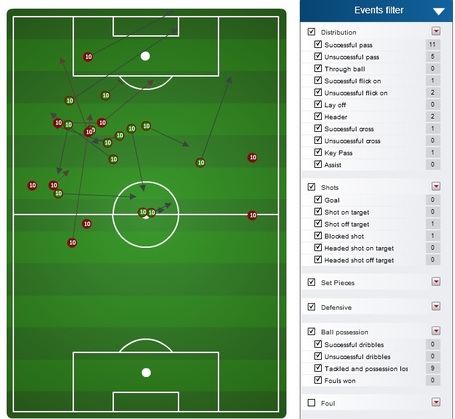 What do you see? Not much, right? Look, you can make all the arguments that you want about him needing proper service, him being a goal poacher, and so on. But I'm just kind of fed up. He should have had an easy equalizing goal in the second half but instead the ball just daintily scurried wide of the far post. More disappointing play from Lekic just leaves me continuing to wonder how much longer he is going to be starting out there--being basically harmless for other teams and having really not much to show for all the talent that he was supposedly coming in with--before we hand the job back over to Schilawski.Or just do something else. This isn't working. There. I said it.

Every night I pray for a striker. A striker that I can get behind--someone I can believe in. And I just keep on hoping that my prayers will soon be answered. Maybe next month, although, you won't catch me holding my breath.

How about you? Care to vent about the game like I just did? Feels good, I'm telling you. Feel free to do so in the comments section.