Share All sharing options for: FortGate: One Week Later

It's been a week, but Fortgate remains heavy on the minds of MLS fans across the nation as well as those who support the New England Revolution. Supporters' groups all over the league have been showing their support through chants and demonstrations in their own sections, and some of the country's best soccer writers have picked up on this story.

Before I move into highlighting those stories and putting up a couple of images, I want to give my own totally subjective opinions on what happened, something I haven't had occasion to do yet. First of all, the "you suck a**hole" chant/shout/saying/whatever is moronic at best. Not only is it unoriginal, but frankly it's too cumbersome to be particularly effective anyway. I'm more in favor of shouting "you suck" at every goal kick; I think that by being short but clear, it packs a bit more punch.

With that said, if supporters' groups receive a clear message from their club's front office that a particular behavior will no longer be tolerated, it is their duty to work with that organization to either convince them that the request is unreasonable or implement a plan of attack that will allow them to accommodate the rulings of team officials. I'm not supporting a continued act of defiance in the face of the rules that Revs fans simply have to deal with. The correctness of those rules is a different debate and enacting that sort of change should be handled separately. For the time being, if the FO says that YSA is taboo, then YSA is taboo.

One of the issues I have with all of this is the fact that the Rebellion and the Riders are working with the FO to resolve this problem. Asking hundreds of drunk 18-35 fans to suddenly stop acting out at a sporting event after years of solidifying the habit is akin to domesticating an adult feral cat; it's not impossible, but it takes a long time and you never really experience 100% success. The Revolution need to be cognizant of this and should have given the Fort more time and been perhaps more helpful and interactive with them in stamping out this particular cry. Involving police and overzealous security should always be the last resort.

Brian Bilello assured us that this was a Revolution operation and not something that TeamOps and Foxborough PD worked out independently. Still, many of those in the supporters' groups (as highlighted in my previous piece on the fracas in the Fort) didn't want to believe that the team officials they've been working so closely with over the last decade and a half were to blame with the severity of the crackdown. I can think of two reasons why it's beginning to look more and more like a coordinated sting by the Revs FO.

For one, the security presence was jacked up from minute one. As Kyle Santos indicated when I spoke with him, the increased TeamOps and Foxborough PD personnel were noticeable as the supporters were entering the Fort; therefore, they weren't responding to in-game complaints, they were preparing for a premeditated attack.

Secondly - and this didn't strike me until later - they chose to do this during a game where there would be 25 days until the next home tilt. Despite the meeting scheduled for Wednesday, that's more than enough time for the outrage over this incident to subside and for local and national news to move on to more pressing matters. Furthermore, the next home game is an exhibition against Manchester United. Any Revolution supporter protest would be completely swallowed up by the 60,000+ soccer fans. Essentially, the FO has backed the supporters groups into a corner that they have no shot at escaping.

Luckily, the national soccer media has refused to let this go quietly. Steve Davis at Daily Soccer Fix, part of our own SB Nation, ran a piece giving the Kraft ownership some sage advice on helping the Revolution move into MLS 3.0. Over at BigSoccer (a website I'm usually loathe to frequent) Tom Dunmore of the always-excellent Pitch Invasion ran two pieces on the Fortgate saga. First was a long one detailing the events of the Chicago match and chastising the organization for trying to alienate their most fervent fans. Then, he moved on (and finally linked me) to highlight the essentials of the growing Support the Fort movement both within New England and across the nation (by the way, don't forget to like Support The Fort on Facebook).

Teams all over the nation have taken up the cause for Revolution fans. Philadelphia, Chicago, Seattle, Dallas, Portland, Columbus, Kansas City and DC are all confirmed to have put up tifo displays from what I've seen. This has also spread beyond MLS, as messages and banners of support from lower-division teams Orlando City and the Ft. Lauderdale Strikers have shown up on the Support the Fort feed.

Tom's work illustrated some of Chicago's tifo displays, but below I will embed some other images that have cropped up all over Facebook as rival SGs continue to show their support of the Fort. If any of these images belong to you and you have a problem with me adding them, email me and they will be immediately removed. Don't forget, if you're going to be in the area, make an appearance at the supporters' meeting with the front office in the Fidelity Investments Clubhouse at Gillette Stadium on Wednesday, June 28th at 7 PM. 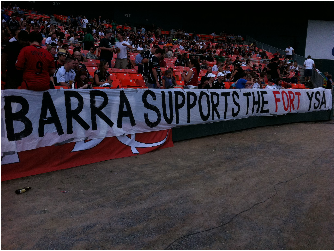 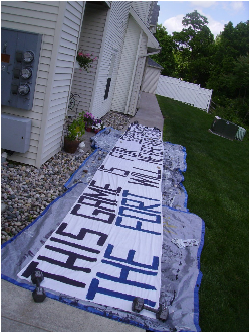 This one is courtesy of Rick Thomas, a Columbus Crew fan. The message reads: "This game is for supporters/The Fort will never walk alone" 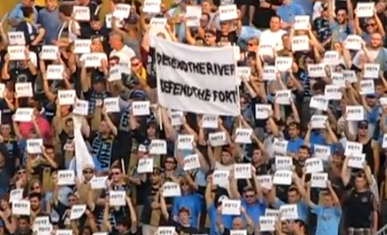 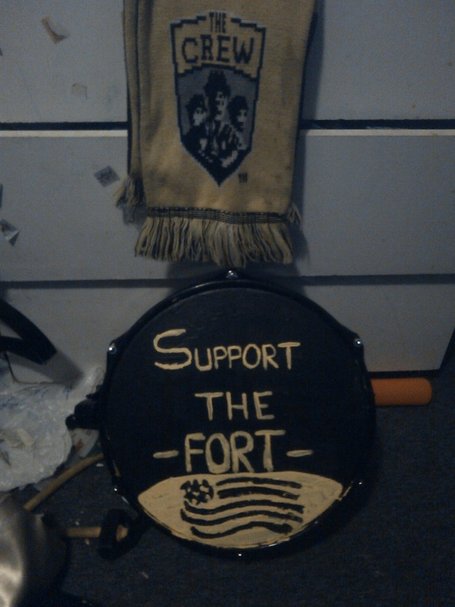 There were Support the Fort drums with the Yellow Nation Army for the Crew as well.

Will you be attending this week's meeting with the FO? Do you have questions you want asked at that meeting or messages you want to leave? Do you have more images of fan support from around the league? Continue the discussion in the comments section below!