New England Revolution And The Death Of The 4-3-3

Share All sharing options for: New England Revolution And The Death Of The 4-3-3

For the last three matches, the New England Revolution have made a tactical switch to a 4-4-2 formation. Previously, Steve Nicol and his coaching staff had experimented with a possession-oriented 4-3-3. The formation had its moments and, for the first time in years, seemed to be on the right track to curing New England's issues with maintaining possession. Despite that, it had become far too apparent that the Revs couldn't score more than once every few games while trotting out a lone striker formation, and a change had to be made.

Oftentimes in the press box I heard several of my fellow members of the media decrying the 4-3-3 on a fundamental level, as though it were a tactic that could never work in this league, or just couldn't ever work in general. I never bought that. A 4-3-3 run the right way is an increasingly common formation that many teams in recent years have proven to be highly effective. Unfortunately, the Revs are not one of those teams. The reason is two-fold.

First of all, it was being run all wrong. In the 4-3-3, the lone striker needs to have the ability to play with his back to goal and hold up the ball, bringing others into the play. The wingers do not function as traditional English wingers, streaking down the flank, working the byline and pinging in crosses. They are expected to be proficient dribblers, frequently cutting inside to become the primary scoring threats and becoming similar to a striker as they are the primary beneficiaries of the striker's flick-ons and passes.

The midfield three is usually composed of a deep-lying holder or playmaker, a destroyer, and a dynamic attacker who can also work box-to-box. The destroyer does exactly what his moniker would indicate: breaks up opposing attacks and does defensive dirty work. The holding mid provides an outlet for passes out of the back line and distributing the ball from deep. The attacking midfielder plays an important box-to-box role, making the important creative passes going forward and also getting into the box to provide another scoring threat.

The width in this formation is provided by the fullbacks. As the wingers cut inside, the fullbacks are expected to overlap and get to the byline, and they are the ones doing most of the traditional crossing. With two more defensively-minded midfielders on the pitch, they can afford to drift further out of position at times without leaving the team vulnerable. 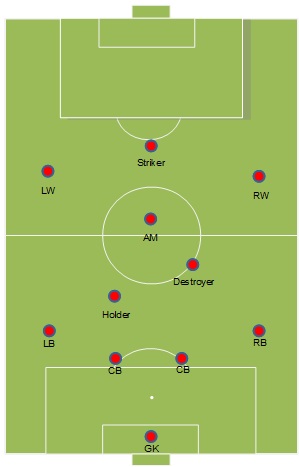 And the 4-3-3 in full attacking flow actually looks more like this (keep in mind that if the ball is on one flank, the fullback on the other side would be hanging much deeper, waiting to collect a far-post cross or covering defensively): 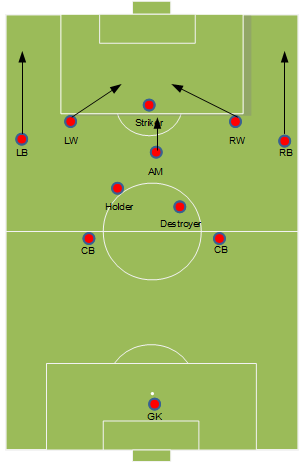 Note the fullbacks playing in an advanced position, and the wingers indicating that they are to cut inside and either bring the ball in on the ground or play off the work of the striker. The center-backs drift a bit wider to cover for the absence of the fullbacks (unless the opponents only leave players up in the middle) and the holder and destroyer hang back in support. In periods of extended attack (or if a counter is very little threat), one of the two can also come forward as a late raider into the box, making runs that other teams rarely pick up.

The Revolution, on the other hand, were isolating the lone striker. The major problem in their execution had to do with the use of the wingers; New England expected the wide midfielders to get to the byline and cross like they would in a 4-4-2. Furthermore, despite having a great header target in Shalrie Joseph playing the advanced midfield role, support for Rajko Lekic (the lone striker) was late. Basically, anytime Zak Boggs or Chris Tierney (Marko Perovic early in the season) got wide and put in a cross, they had a single target to aim for in Lekic. It's not too difficult for any professional soccer defense to deal with just one player.

Fullbacks were often too slow to get forward, but that also had a lot to do with how hard it was for the Revs to maintain possession in midfield. That point brings us to the second reason why the 4-3-3 didn't work in New England: personnel.

It takes specific types of players to fill the roles in this formation. The lone striker has to be a man comfortable controlling passes of all kinds, with a killing first-touch and a good soccer brain to distribute the ball to the attackers around him. Rajko Lekic is not this player. Lekic is a goal poacher, and though he possesses a big body, he doesn't do his best work with his back to goal.

The wingers need to be comfortable cutting inside most of the time. Marko Perovic has no problem with that, but the rest of the Revs wide players seem to have trouble grasping the concept. Sainey Nyassi is a traditional speedy winger who gets to the byline, and Chris Tierney's strength is in his phenomenal crossing ability with the left foot. Zak Boggs also looks always to get wide and get in crosses.

When fully healthy, the Revolution may have had the pieces in midfield to run the 4-3-3. A starting trio of Ousmane Dabo, Shalrie Joseph, and Benny Feilhaber could easily do what is required to make that formation tick. Dabo does well both as a holder and as a destroyer, as does Joseph. Feilhaber works best as the advanced midfielder with his attacking sense and passing ability, but he could also work in tandem with Joseph on that.

Unfortunately, the Revs have never really been fully healthy this season. The midfield three has more often been a rotating combination of Joseph, Feilhaber, Stephen McCarthy, and Pat Phelan. Phelan plays the destroyer to a T, but is generally a passing black hole and can often be a yellow or red card liability. McCarthy has shown promise, but the rookie has yet to establish his identity in the midfield. Dabo's considerable talents as a possessor and passer have largely been left on the training table.

The inability to possess leaves the back four constantly in jeopardy of being exposed, meaning that the fullbacks don't have the freedom to get forward and overlap nearly as often as they are supposed to. Basically, the Revolution 4-3-3 turned into a toothless, twisted mutation of a 4-5-1 and a 4-4-2 as New England struggled to get numbers forward or possess the ball and spent most of their matches bogged down in the midfield.

There's nothing wrong with the 4-3-3, but as the last three matches have shown, the 4-4-2 just makes a lot more sense for this team.