Share All sharing options for: The Week In Tweets (Weeks 11 and 12)

Due to a fractured wrist which was the result of an own goal that I caused during a pick-up soccer game, I was unable to type up any tweet recap for last week. As such, I'll cover a couple tweets from week 11 that I didn't want to slip by, but then move onto week 12 which had plenty of excitement as the Revs (and a great number of Revs fans) traveled to New Jersey to play our I-95 rivals, the Red Bulls.

Tweets after the jump here..

First a few tweets I missed from last week: Darrius Barnes and Kevin Alston learned a thing or two about parenting down in Texas

And Shalrie Joseph says that X-Men: First Class is the best X-Men movie ever, so much so that it warranted post-movie fist-pumping

(What did you think of the new X-Men flick? Leave your opinions in the comment. No, seriously, I’m curious. Is it really as good as everyone is saying?)

On to this week: Darrius Barnes expressed his discontent with ESPN’s continual coverage of all things King James, which I can understand

But, unfortunately for Darrius, after last night, I have a feeling there will be at least another month or so of the "still no ring for the king" coverage. Personally, I hope they rub it in all summer. Congrats, Mavs.

Also, AJ Soares (and the rest of the Revolution community) would like to remind everyone to vote for the Revs in this year’s MLS All-Star Team ballot (if you haven’t done so already)

Perhaps the biggest and best wave of tweets from this week had to do with the Revolution supporters making the trek down to Red Bull Arena to cheer on the team as we took on the New York Red Bulls Friday night.

Despite a tough loss, the fans were heard loud and proud by all; most importantly by the team, who had many thanks to extend 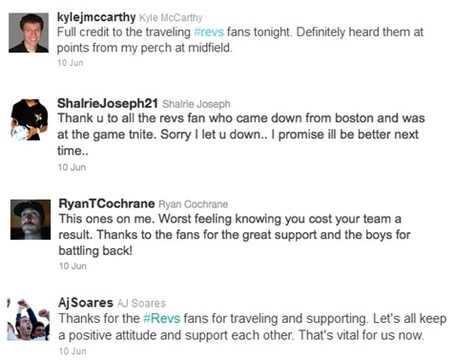 Until next week, later tweeters