New England Revolution vs. Houston Dynamo: Freeman's Goal Was A Handball, But Boswell Got Robbed

Share All sharing options for: New England Revolution vs. Houston Dynamo: Freeman's Goal Was A Handball, But Boswell Got Robbed

The New England Revolution lost a tough one to the Houston Dynamo last night 0-1, thanks to a controversial goal from Hunter Freeman. The defeat dropped the Revs to a tie for 6th in the in the Eastern Conference with only five goals scored in six matches.

New England struggled to create chances in the match and probably didn't deserve a positive result anyway, despite the presence of their brand new finishing specialist, Rajko Lekic. Frankly, though, I really don't want to dwell on that. After every match I talk about how poor the Revs are at passing, maintaining possession and getting service to the strikers, but in this case they were facing a well-organized team in a hostile environment without the services of their captain and best player, Shalrie Joseph. The lack of good ball movement is frustrating, but excusable.

Instead, I'll dwell on officiating mistakes. Because, you know, we never talk about that.

Keep in mind, however, that this is not a case of gross homerism. The Revs were jobbed on the winning goal, but they still deserved to lose - because the Dynamo appeared to have scored already earlier in the second half. Zack Schilawski may have made a heads up play to clear the ball in the 57th, but the ball definitely looked to be over the line.

Let's have a look at that incident first, after the jump. 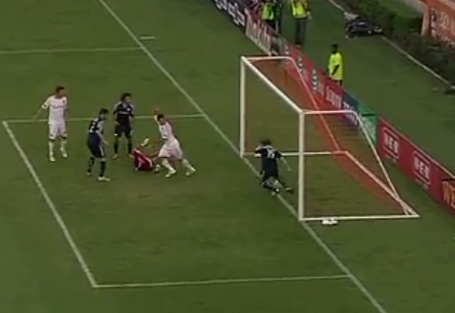 This shot is taken before Schilawski makes contact with the ball. At this point the ball appears to be just millimeters from being totally over the line, and in the slow-motion video (which I watched repeatedly on mlssoccer.com) it looks clear that the ball had totally crossed. It's a tough call for the linesman because Schilawski is shielding him as he's clearing the ball, but the video doesn't lie. The officials got that one wrong, and Bobby Boswell was robbed of his second goal in as many games.

The handball no-call is a lot less cut and dry. Zach "The Ginge" Woosley over at Dynamo Theory addressed it this morning, saying that it wasn't a handball...technically. You can read the whole thing via that link, but the meat of his statement is this:

"It's clear the ball deflected off Freeman's hand and in to the New England goal. However, his hand was in a natural position (based on the contact) and he made no apparent swinging motion or obvious attempt with his hand or arm to affect the path of the ball...and that's my evaluation at full speed."

Arm contact with the ball is deemed permissible by the laws of the game if the following is true:

Ball to hand (no foul)

Zach argues that it is not a foul based on items three and four under ball-to-hand. I disagree. Admittedly, Ginge has several more images to make his point, but we'll make do with the one that I have (courtesy of Zach, actually). 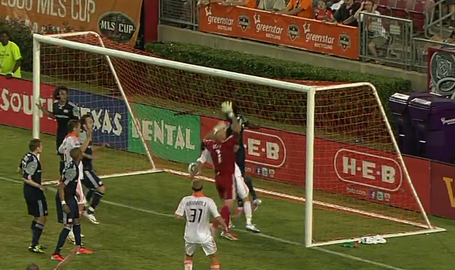 To me, Freeman's arm is obviously in an unnatural position. It is out away from his body and, upon viewing the slow-motion replay, the ball hits the outstretched arm and rolls into the goal. That right there should make it a handball foul and not a goal.

It is also being argued by those who believe the goal to be legitimate that Freeman's arms were out because he was being fouled by Reis, who was climbing up his back and whose arm was hitting him in the back of the head. The latter assertion is ludicrous; viewing the images and the video clearly indicates that Freeman's head was ducked long before Reis' limb even reaches his back, let alone hits him (which is also questionable). Regardless, by their logic, the arms were in a natural position.

I have also heard (and read in the comments on that piece) that Freeman didn't see the ball, so it isn't a handball based on item four under ball-to-hand. This simply cannot be the case. Freeman's head was down, certainly; but it was down because he was pushing his hips backwards to box out Matt Reis. Zach and the other commenters on Dynamo Theory asserted that Hunter Freeman had been the first to see where the ball was going and took up a good position - thus, he was not fouling Reis by boxing him out, but holding his ground.

So really the only way Freeman could have put the ball in with his arm accidentally is if he was fouling Reis, which obviously means the goal shouldn't stand. If Freeman had the positioning advantage and thus did not foul Matt, then it was a handball based on his arms being extended perpendicular to his body and/or the fact that he consciously took up the proper position on the ball to receive it on its way down, indicating that he knew where it was, or at least where it would be.

Before I turn it over to your comments, I'd like to point out that I don't want to unduly criticize Alex Prus. The first no-call was totally on his linesman, as Prus would never have had the proper angle to see that ball cross the line. The second incident is on him but it was still an incredibly difficult call to make based solely on the fact that he'd have to see through a veritable forest of bodies. It all happened so fast that it's very unfair to give Prus the same sort of criticism leveled at, say, Jasen Anno last week, or Baldomero Toledo in games previous.

What do you think? Were those goals, or did the refs miss calls? Let us know below!